This project was a finalist for the Service Design Award 2016 in the category: Commercial, professional work.

Insurance companies are not generally regarded with much affection yet Norwegian insurer Gjensidige has some of the most satisfied customers in the country regardless of industry. In just four years, they managed to move from 77th to 11th place in the Norwegian customer satisfaction ranking, across all industries. This is due to what they call ‘extreme customer orientation’ - the product of dedicated leadership and transformation across services. Livework has worked with Gjensidige since 2007 in a long-term strategic partnership, supporting them on challenges ranging from selfservice strategy to training and design of CRM interfaces for call centre staff. During the relationship, Gjensidige and Livework ran a total of over 200 face-to-face interviews with staff and private and commercial customers, looking for improvements and innovations. This yielded lasting insights on internal issues that staff deal with on a day to day basis, and what customers really value.

Livework also trained staff on using the tools that are fundamental to designing multichannel experiences - from simple persona cards to more sophisticated service blueprints - building internal capabilities to ensure that skills became embedded and seeing things from the customers’ viewpoint remain central to company processes and policy. We will zoom in to a few of the individual projects within the larger arc of our continuing partnership with Gjensidige to examine and explain the process and outcomes in detail, but want to stress that the work we’ve done together is more than the sum of individual projects’ parts. Gjensidige has cleverly used service design as one of several components in a radical Livework 01 Submission Report / SDN award 2016 2 transformation of the entire organisation, involving staff from every level and department. The results come in manifold benefits for the customer, organisation and market as a whole.

Most people dread calling their insurance company to make a claim. The expectation is that, at best, it will be a complicated, time-consuming process, and at worst, there may be something in the small print that nullifies the claim.

Interviews with customers revealed that people generally feel emotional and vulnerable in the immediate aftermath of an event like a car crash, sewage flooding their house, or having a wallet stolen in Thailand. The last thing they need is to be asked: “What’s your customer number?”, and yet all processes and systems have been built with this as the starting point of the conversation.

Interviews and observations with staff revealed that the best claims agents are those who adapt their workflow to humanise the process. They let the customer talk freely for the first minute or so and make notes, waiting for them to calm down before saying ‘Right, let’s get this sorted’ and only then ask for their customer number. This means they get most of the information they need upfront whilst the customer vents and also provides a higher degree of intuition around possible fraud.

First of all we helped develop a set of service principles for claims handling, where for example, the first principle says ‘It’s important for our customers that our customers feel that we trust them’. The principles were used as a guide for any improvement projects or changes that were made in the claims department.We also found out that some customers’ claims were processed so fast that customers didn’t realise their case was settled and their money had arrived. This was truly a missed opportunity. On the other hand, there are more complex cases that can go on for years (eg.contentious medical claims such as whiplash). These customers tend to worry and contact their agent frequently, so during co-creative workshops a messaging service was developed that keeps customers informed about progress minimizing frustration and time-wasting for both staff and customers.

To ensure the claims handling process is customer-friendly, the IT-system agents use is a crucial touchpoint to design. We helped Gjensidige redesign their claims handling system, from a rigid step-by-step system to a dynamic interface where agents can switch between different input modules and tools in response to customers’ needs. We also created a new feature where the agent can make notes in an ‘anonymous’ case file, transferring it to the actual customer’s file later.

A key technique used throughout our relationship with Gjensidige is prototyping. The onepage contract prototype was a good example of the difference between what people say and what they do. Many interviewees suggested that a one-page contract would be more user-friendly than the lengthy policy documents few actually read. During prototyping, however, it turned out that customers didn’t trust a one-page contract, fearing that too much important detail was hidden from them. Eventually a comprehensive yet compact 5-6 page document replaced the old policy documents that ran to 20 or 30 pages.

We also prototyped a new offer sent out in the mail after a sales call or meeting. The insights research showed that this was one of the most crucial touchpoint failures, and the company didn’t realise the potential of improving it. Previously, customers spoke with a salesperson and then couldn’t remember the key points or understand the offer and therefore failed to make a purchasing decision. Redesigning this touchpoint helped people make a decision at home, and the company avoided losing customers because of this hidden problem.

As well as working on existing products and processes, we helped Gjensidige develop new services, such as one aimed specifically as the youth market. Using rapid cycles of cocreation with potential customers, we developed the idea of combining banking and insurance for people aged 20 to 30. However, Gjensidige’s insurance and banking services were two completely separate business units and for the suggested service to work, all the different parties needed to work together. We created a Service Blueprint which allowed everyone to see what had to be done behind the scenes to tie together banking and insurance in an effortless way for the customer. It also enabled ongoing conversation between the two divisions. Gjensidige went on to use this Service Blueprint to build the service as well as create a brief for the marketing agency and those building the final website. The value of gaining real insights from all stakeholders and then translating these into a clear service proposition, prototyping key touchpoints and testing them with users is clear. It allows for feedback on the design of the physical touchpoints themselves but also on the entire service proposition before taking it to market. The results of these kind of company-wide changes can take time to surface which is why we’re reporting on this long term, ongoing engagement now when the full scale and impact of this revolution in insurance – on customers, the organization, and the market as a whole is becoming clear.

Output When assessing the benefits for the customer, the organization and the market, it’s inevitable that we’ll use statistics: we started this document with the one about Gjensidige’s ascent in the National Norwegian Customer Satisfaction survey which clearly demonstrates the rise in customer satisfaction levels. There’s also the fact that sales per call grew by almost 50% in three years (between 2010-13) and the share price almost doubled in the same period.One of the key indicators of success of both the organizational transformation as a whole and the many projects comprised within it, is the introduction of an individual touch-point customer satisfaction index. Data is collected at each and every touchpoint a customer uses in their dealings with Gjensidige. Gaining information about what customers are experiencing, when, and with whom has been fundamental for the improvement of the total customer experience and our analysis of success factors and the mediating role of design in this transition.As well as the facts and figures, that demonstrate an obvious financial benefit for the business, there are the many benefits to customers that underlie this climb in satisfaction, sales and loyalty. The reasons customers report satisfaction with Gjensidige are to do with feeling they’re being treated as human beings. With service principles at the heart of the offer that prioritize making the customer feel trusted and valued, they feel their insurance provider is on their side – designing policy documents they can understand, bundling products for ease of access, providing post-sales advice that facilitates decision making and keeping them appraised of the progress of their claims.

Staff engagement has likewise been both a key factor in the success of the undertaking and also a benefit to the organization. By involving all departments in the change process, and ensuring that staff at all levels are as invested in customer satisfaction as the management (by directly tying bonuses to the individual touch-point customer satisfaction index for instance), employees feel that their input and feedback is valued and that they’re integral to the success of the company.

The value of service design is clear. Genuine insights from customers and staff now drive service improvements, new propositions are rigorously piloted and tested before going to market, and changes are carefully monitored to gauge impact with customers. Putting the customer at the heart of the business has enabled this grand old insurer to significantly improve its offer and maintain their status as a reliable bastion elevated above the pricecomparison fight. Winning on service quality, rather than price, pays dividends all round.

Gjensidige acknowledges that the impact of its work with Livework is, as described in the above. Working strategically and tactically with service design has helped the company bring focus to the customer experience and been a strong driver to innovate and improve services. At the outset of the program, we had a cross-industry customer satisfaction index of 77. At the end of the program, it had achieved 11th place and the relationship with Livework and the projects they've been hired to help with have been a key factor to achieving results. Not only have they solved concrete challenges in projects, but they’ve also been a strong contributor to a culture change where the company now utilise service design tools and thinking themselves, and this is the most valuable impact that working with Livework has brought to Gjensidige. 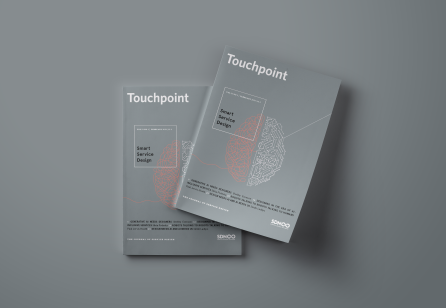